Parents may feel perplexed or frustrated by a child who is unable to pay attention in school but can nonetheless stay in front of a screen playing video games for hours on end. While the idea of a prescription video game might sound outlandish, children might already be using video games as a self-administered therapy.

How can video games help with ADHD?

For children with attention deficit hyperactivity disorder (ADHD), video games are a valuable medium to express themselves. Not only are video games effective at capturing children’s focus, but online games can also give introverted kids a safe space that encourages social interactions and teamwork.

ADHD is a neurodevelopmental disorder that shifts the capability for attention in children. Several situations and activities that are mundane for most people can pose a challenge to those with ADHD, who need an extra effort to adapt themselves to the rules of society. Video games offer children worlds with consistent sets of rules and an environment where they can make mistakes without the fear of real repercussions.

Is ADHD a disability?

How much gaming is too much?

Like with any past time, spending too much time playing video games can affect the physical and mental health of a person. While there isn’t a consensus among experts on how many hours of gaming is too much, many agree that playing video games for more than 5 hours a day may be a sign of video game addiction (source).

Some researchers and psychologists make the point that it is not necessarily the hours played that have an impact on a person, but the interference video games may be having on other areas of a person’s life. A child who plays video games every afternoon once his chores are done is not showing the same behavioral patterns as one whose video game time impacts his school performance and sleeping schedule.

According to researchers at Oxford University, there is no correlation between a person’s digital or online activity and their wellbeing. Limiting video game playtime may actually have a negative effect on children’s emotions (source). If a child is playing too many video games, they may be using them as a coping mechanism to alleviate the anxiety caused by other areas of their life. Patients are strongly encouraged to seek medical advice or a diagnosis if they believe they have any sort of addiction.

Why are people with ADHD more attracted to video games?

People with ADHD are stimulated by certain features of video games in ways they may find hard to experience in their daily lives. Video games enhance reaction times, encourage metacognition, provide constant engagement, and actively reward the improvement of skills.

The special appeal of video games lies in their capacity for constant stimulation. When somebody is playing a video game, they are receiving a persistent stream of information from the screen. Moreover, if the information is not hastily acted upon, it will end in a negative outcome for the player. Bursts of attention are recompensed, leaving children with attention deficit disorder with very little time for idle thoughts.

For instance, failing to press a button at the right time may cause a player’s character to fall off a cliff, leading to a game over. More often than not, the window of time between a game telegraphing that a player must perform an action and their time to accomplish that action can be less than a second, leading the most avid video game players to develop lightning-fast reflexes.

Traditionally, video games have been regarded as a negative activity, and much research performed on their use was skewed towards portraying them as violent. However, research has found that violence is not an important factor in a person’s enjoyment of a video game (source). The main factors that bring players towards video games are the enjoyment of the challenge and the freedom virtual worlds provide.

On the other hand, video games are proving to have therapeutic potential. Researchers acknowledge that video games can be an effective trajectory for psychotherapy in child and adolescent psychiatry (source).

Video games train the hands to be more nimble and incentivize the development of good hand-eye coordination. The same actions that help children gain a competitive edge in a game can be used later in life to become better surgeons, chefs, or mechanical engineers.

Research shows that people who play video games on a regular basis have more gray matter than the average population (source). An increase in gray matter improves muscle control, perception skills such as seeing and hearing, and memory function. Furthermore, it strengthens the connectivity in certain regions of the brain.

While 20th-century media created a portrayal of the video game player as a withdrawn outcast, the average gamer doesn’t fit this stereotype. Children of all ages have social interactions and make friends in online games. The collaborative component of video games helps children develop social skills and build better relationships.

Video games allow children to build cities, explore representations of historic places and events, or even go fishing. Many games challenge the player with puzzles that require them to think out of the box. The number of possible scenarios faced by children in video games allows them to create new strategies and develop their imagination.

For most of their existence, video games have been played sitting down. However, the latest advancements in technology are starting to include physical activities in gameplay. Virtual reality (VR) and augmented reality (AR) are two examples of video game design approaches that get children off their chairs and move their bodies. Wii Sports is an example of a video game that promotes the movement of upper body muscles.

Information from clinical trials shows that some video games are efficient at raising a patient’s mood and promoting a healthy heart rhythm (source). The positive therapeutic effects of video games are not unknown to science, and behavioral interventions using them are becoming a more commonplace occurrence.

The themes and genres explored by video games vary widely. Modern video games use academic subjects as inspiration, including world history, chemistry, and architecture and this information trickles down to the player. Meanwhile, the math and reading skills of children are passively engaged when playing video games.

Certain games which are called ‘’serious games’’ are even designed to educate or train people for a task or profession. For example, Microsoft Flight Simulator was created to be a comprehensive simulation of civil aviation.

Other examples of serious games include:

Failure to accomplish one’s goals in real life can lead to frustration and harsh consequences. However, if a video game player fails they just have to hit retry and give a challenge another go. Due to this, video games can be a valuable tool to teach children to be independent and work towards their goals.

Kairos: Heroes of Time is a fun and innovative augmented reality video game designed to help children with ADHD develop their autonomy and stick to a healthy daily routine. Parents can customize the Kairos app according to the needs of their child, syncing the app’s functionality to their child’s schedule.

A virtual coach AI built into the game can help parents manage their kids’ routines and reward children for doing their daily chores and tasks, such as brushing their teeth or going to sleep on time. As they progress through the game, children will be able to unlock new abilities and superpowers, which can be used by parents to reward their good behavior.  Kairos can be downloaded for free on Google Play and the Apple App Store. 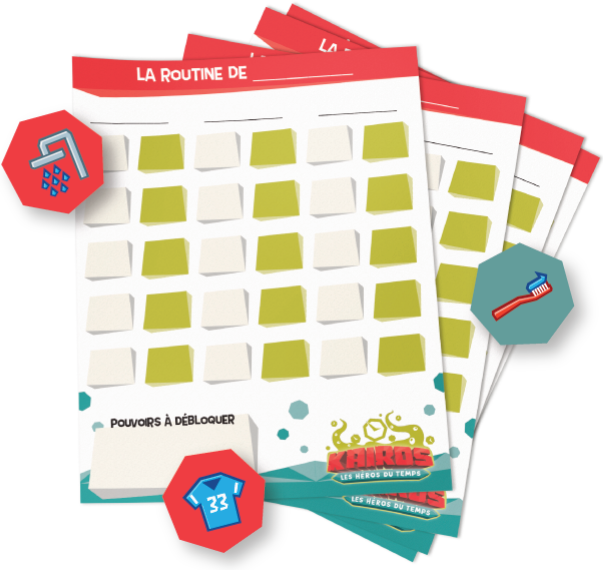